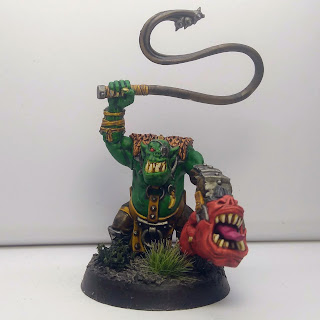 July's theme of #mortalcitizens was Farmer/Agriculture/Animal Husbandry . Runtgrod is responsible for handling the snotlings and squigs of his tribe. He is proud of his critters and enjoys training them, even though he already lost an eye in the process. For this conversion I used three kits:  The body and the arm with squig belong to the Runtherd from the 40k Ork Gretchin kit.  The arm with the whip is from the WHFB Orc Boar Chariot. The head is from an Ironjawz Gore-Grunta.
Post a Comment
Read more 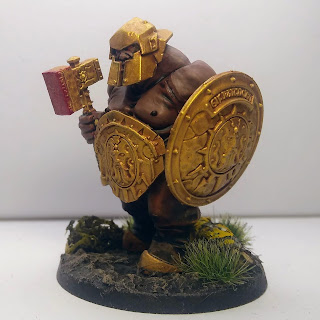 Bolgof da Lightnin' Lad claims to be a real Stormcast sent by "Sigmork 'imself". In reality he got his gear by annihilating an Annihilator. A few months ago I got the AoS Dominion box for cheap and thought it would be a fun project to convert an ogor into a Stormcast Eternal or rather an ogor Maneater (mercenary) who got hired by the warriors of Sigmar at some point. The base of the conversion is a standard ogor body, the helmet is from the Mournfang Rider kit and the hammer and shield are from a Stormcast Annihilator. Bolgof's gutplate was originally a Vindictor shield.
Post a Comment
Read more 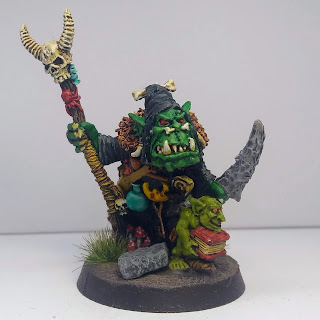 June's theme of #mortalcitizens is Scholar/Librarian/Historian , which is a bit of a difficult subject for greenskins. Orruks and grots normally don't really care about science and knowledge in general. They do however have have a simple written language based on glyphs as well as something similar to cuneiform script according to old Ork codices. The members of greenskin society that are most similar to scholars of other civilizations are their shamans. So I decided to paint up an orruk shaman, who funnily enough also has a snotling assistant carrying a tome. Gultuff has been the shaman of his tribe for a long time and is becoming more and more forgetful. Fortunately his unusually intelligent snotling assistant Scribble keeps track of all recipes in his tome. The model I used is an Orc Ancient Shaman from Knightmare Miniatures, which I acquired in one of their recent Kickstarter campaigns. I really like the miniature, there are a lot of small things to discover. Fun fact:
Post a Comment
Read more 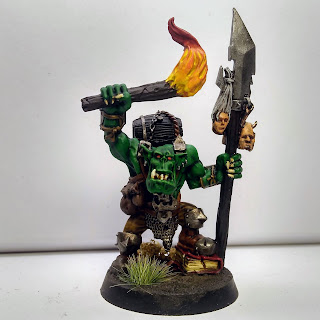 Here's my entry for May's #mortalcitizens challenge, took me a bit longer than expected to finish this miniature. The theme for this month is Explorer and I think I found a very fitting model in my collection. Skarkrak is an orruk explorer who's always on the move, delving into the ruins and caves of the mortal realms to find "shiny fings".     The model in question is an "Orc Raider with Torch", which was a Mail Order exclusive miniature released nearly 15 years ago. This description is from the 2009 Citadel Available to Order catalogue: When Orcs aren’t fighting the enemy, they’re usually fighting each other. When they’re not fighting at all, they’re probably making off with the enemy’s loot or ransacking their villages. This metal model is another classic from the talented hands of Seb Perbet.
Post a Comment
Read more 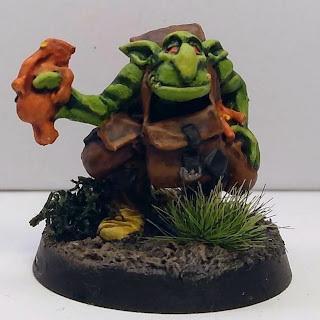 The theme for April's #mortalcitizens challenge is Trader/Merchant , and I decided it's the perfect opportunity for painting a model I ordered 15+ years ago from the Mail Order. The miniature in question is a Gretchin with Oil Squig from 2nd edition Warhammer 40k, which was sculpted in 1994. Ripoff is a grot squig trader, who wanders from greenskin village to village and sells various squiggly beasts including oil squigs, hair squigs and gob squigs. Other orruks and grots accuse him of charging too much teef for his squigs, hence he became known as Ripoff.
Post a Comment
Read more 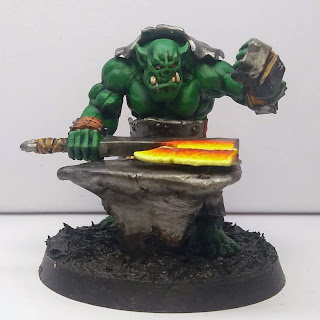 My entry for March's #mortalcitizens (Quartermaster/Logistics) as well as my last entry for Swordmaster's #MonsterMarch6 challenge is an Orruk Brute that has been converted to a smith. Gofbash is a skillful smith, whose job it is to forge weapons and armor for his fellow orruks. He's using his fists to shape the hot metal as it's the tradition of the Ironjawz. The base model is an Orruk Brute, the arms are from the Ork Nobz kit and the anvil is made from greenstuff. For painting the hot metal I followed this tutorial and I'm quite happy with the result. The inspiration for this conversion came from the Battletome: Ironjawz, where it is mentioned that Ironjawz are able to shape metal with their bare hands.
Post a Comment
Read more 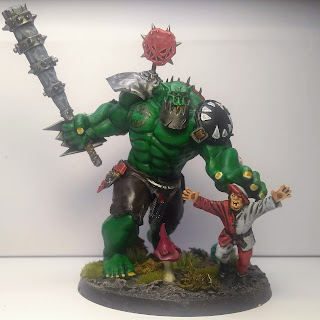 My next entry for Swordmaster's #MonsterMarch6 challenge is a conversion based on the Incredible Hulk miniature from Marvel Crisis Protocol. The model represents Megaboss Gorgrim Bloodjaw, the leader of my Destruction army.  I started with a simple head swap (taken from a Black Reach Nob), gave him a club from the Ironguts kit and then added different pieces of armor. One of his shoulder pads is actually the backplate of an Ironjaw Brute, the other one is an Ogor gutplate. On his back he wears a large Kruleboy Skareshield taken from the Killaboss on Gnashtoof kit. I tried to incorporate bits from different armies of Destruction to emphasize him being the boss of all my orruks, ogors and grots.  His elbow pads were originally orc and Blood Bowl ogre shoulder pads, while the armor on his club-swinging hand is an Ardboy shield. Surprisingly all those bits fit the Hulk model really well, there wasn't a lot of trimming necessary. Even the fleeing peasant (aka Johann Strehn) had the
Post a Comment
Read more 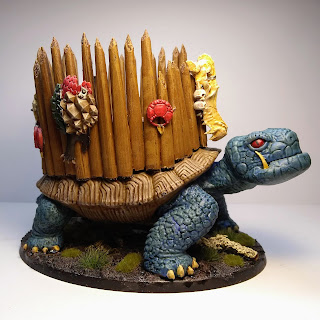 My first entry for Swordmaster's #MonsterMarch6 painting challenge is a warbeast for my boglars (swamp goblins). The model was originally a toy tortoise that I converted by sculpting a bigger jaw out of greenstuff and buidling a howdah using chopsticks. I actually built it around Christmas 2019 if I remember correctly, but didn't finish painting it. As the theme of the challenge is based around monstrous models, I decided now's the perfect time to complete the project. The project was heavily influenced by Thantsants' War Tortoise , who also used a turtle as a mount for his swamp goblins. I tried to paint the model similar to the World of Warcraft Steeljaw Snapper , which was the pet of my orc hunter ages ago. Lorewise, I see it as some kind of tortoise-squig, which was tamed by the Boglars and named Dursquiggo . I tried to give the base a swampy look by adding some swamp tufts by Army Painter, lichen from my garden and Agrax Earthshade Gloss.  The bits on the howdah
Post a Comment
Read more 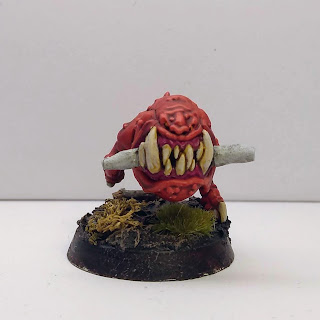 February's theme of the #mortalcitizens challenge was Messenger/Diplomat/Court Advisor , in my opinion a bit of a difficult theme for the savage forces of Destruction. I wasn't sure in which direction to go before finding a great piece of background in the current Codex: Orks mentioning squigs being used to deliver messages containing hastily written glyphs. Wazza is a cave squig used by Megaboss Gorgrim Bloodjaw to deliver messages to other warlords. He was trained by the squig herder Drizgit who tried to teach him not to eat the scrolls he is given. Surprisingly most deliveries are successful. The model used is Bonekrakka from the Zarbag's Gitz Warhammer Underworlds warband. I converted it a bit by replacing the bone in its mouth with a scroll made from greenstuff.
2 comments
Read more 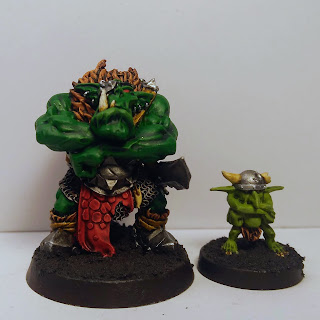 Inspired by Warboss Kurgan's orruk sky-pirates , I decided to take part in the #mortalcitizens challenge as well. This is is my entry for January and also my entry for Dave Stone's "Paint What You Got" challenge . The theme for this month was Constable/Judiciary/Investigator and as greenskins don't have any law enforcers to my knowledge (they don't even have any laws), I decided to paint up an orruk whose job it is to beat up other orruks. Unkismak, orruk bouncer at Da Hungry Grunta brewhouse together with his snotling companion Snotsmak. Unkismak was hired by the local brewgit after coming out on top in an infamous bar brawl involving two dozen orruks.   For anyone interested, the miniature is the Games Day 2007 exclusive Orc Boss.
2 comments
Read more
More posts

Tribes of the Realms